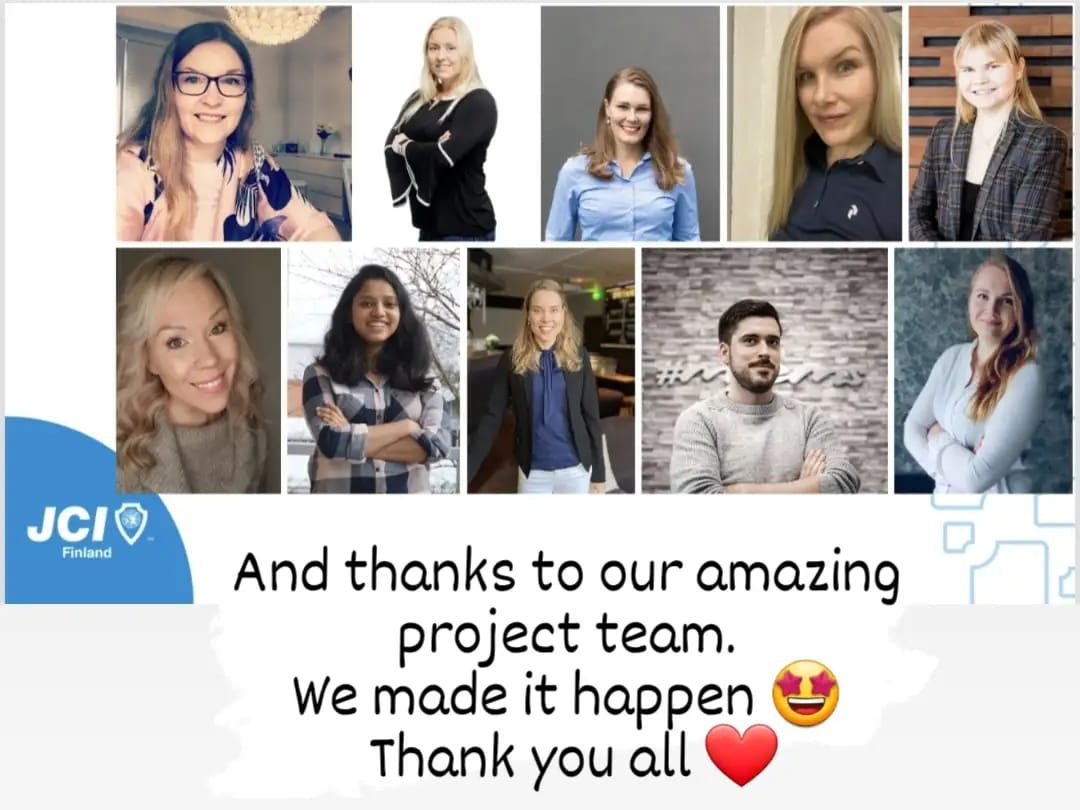 Project team did a great job

Partnership packages were created early on by a partnership team to get the partner search and sales up and running as quickly as possible. The project team promised a 10% commission for a cold lead and 20% if a local chamber did the deals behalf of the project team.

During the partner search, the Expert team focused on finding good experts and themes for future events. The team found 8 experts from the JCI network from all around the world and built the program around their desired topics. In addition, 3 experts from the project team were involved. The rough program was ready before the academy member search.

A big part of marketing and sales was video material made by project manager Riikka Pohjanen, flyers related to the partner and academy member search and banners presenting the program and speakers made by the communications team. All material was completed in either English or both Finnish and English.

Teams, Whatsapp, Facebook and e-mail were used as communication channels with the academy members, experts and the project team. In addition to the above, the academy was also promoted in the local chambers’ Whatsapp groups, JCI Finland’s Facebook groups, Academy Facebook page, as well as in the JCI Europe members group in Facebook.

Due to the corona, the academy was implemented entirely remotely, and this opened the markets also outside of JCI Finland. The Academy member search was launched before the Christmas holidays. Marketing was done e.g. in Nordic Group and JCI Europe members group in Facebook, but the farthest Academy members attended even from South Africa. South Africa also announced its intention to host an international academy in the coming years.

In addition to the academy members, the events were also opened to the public through Facebook events, and we got event participants from all over the world. According to the project event participants were at least from Finland, Latvia, South Africa, Germany, Denmark, Norway, Bulgaria, Mongolia, India, Russia, Poland, Estonia, Mariehamn and Sweden.

Also event-specific teams were created by the project team for the actual events. There where roles like host, the tech support and the communications and marketing responsible. In addition to this, each event had their own expert or experts who gave their keynote during the Zoom events.

With the exception of the Academy launch and the closing event, the events were divided into two parts: there was a public expert section at the beginning, followed by a VIP section for academy members only. The number of events was 7 all together and we had around 30-40 participants and academy members per event.

Feedback was collected from academy members and participants several times during the year. At the closing event, we also received feedback praising the project team and stating that the international academy provided the only connection to the world and international network in the middle of the pandemia.

According to the project team, international academy helped to understand how exceptional the JCI network is around the world and how easy it is to collaborate with people in different countries through the organization.

The Academy exceeded expectations with its internationality, as the original idea was to offer the Academy only to JCI Finland members. In the end, there were academy members, experts and event participants from all over the world.

The International Academy met its goals and will be continued in 2022 under the leadership of project manager Jenna Ruuskanen from JCI Jyväskylä. The method and date of implementation will be published later.

I would like to thank our wonderful academy project team for over a year of cooperation. Thanks to Pauliina Papunen, EVP INT, JCI Finland and Mari Hamara, NO INT, JCI Finland for your help and guidance. Thanks to academy members, our amazing experts, academy partners and all participants in our events. Thank you also to JCI Finland.